What is Silicon Valley and Is it actually a Valley?

Silicon Valley is another name for the Southern Part of San Francisco, California, USA.

The term 'Silicon' originates from the populated Silicon Chip (e.g Microprocessor) Makers in the region, while 'Valley' denotes the Santa Clara Valley in Santa Clara County.

It is a valley just like the Valley in Ventura County.

As a geographic location and region for high tech and startup companies, several Movies and TV shows/TV series have been filmed here, as well as Documentaries about Silicon Valley.

Given below, are some of the best Movies and TV Shows about Silicon Valley.

Even though most of these movies are far from the truth and would take months and years of research to produce a movie very close to the Manufacturer's past experiences, they still give us an insight to how they lived and the turning point in their lives.


Movies and TV Shows about Silicon Valley either depict the Startup of Companies in Silicon Valley or are movies filmed in this region. They include:

It tells a story of men who brought about a revolution in technology and how it led to the advancements we have now.

In a way, we get to know their biography through a story told of their experience in College (U.C. Berkeley campus and Harvard University), managing and running a company, and the actions they took that brought about significant improvements.

The companies portrayed here are Apple Computer Corporation (The Lisa and Macintosh) and Microsoft Inc. with casts taking the roles of Paul Allen, Bill Gates, and Steve Jobs.

2. The First $20 Million Is Always the Hardest


The First $20 Million Is Always the Hardest was released in 2002, and it is a novel-based movie focusing on three Inventors at LaHonda Research Institute.

Their aim and that of the team is to design a computer called, PC99, which is to be sold at $99.

This is done by shedding the non-essential parts and the computer's memory storage components such as Hard Drive, RAM, and Floppy disk, but retaining the CPU and Monitor as well as Peripherals such as the Keyboard and Mouse.

This way, the software files and other data are stored on the internet.

Through their struggles to reach this target price, we get to see the daily lives of early manufacturers. 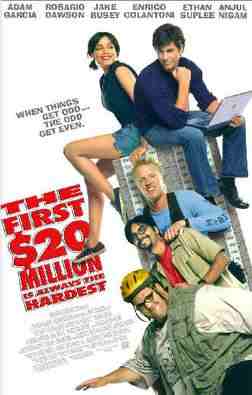 
This is a TV series about a Startup company, Pied Piper, in Silicon Valley founded by five men.

It features Entrepreneurs with Shares in the company, Programmers, and System Architects, all of who play a role in the company to form the Piper team.

Silicon Valley was first released in 2014 on the HBO network and currently, there are four seasons of this TV show, where the latest Silicon Valley Season 5 will be premiered on March 25, 2018.

Hoofman, the lead Actor discovers that the company he works for to complete the global communication's system, Synapse, is stealing source code from other Programmers and killing them.

He then unravels many secrets and seeks to find evidence to expose the company to the world. Techlass.

Other than faith in his company, he once again trusts the wrong person and is betrayed, but In the end, he is successful in exposing the crimes committed by the CEO of  NURV and his entourage.


Middle Men Movie was released in 2009 and is based on the real-life experience of  Christopher Mallick in-relation to Paycom and ePassporte.

Millions are made from their Website and it is expanded with live videos and an online credit card billing service where other websites in the same niche use their billing services as a payment platform for their customers.

As is expected, greed sets in and the FBI steps in.


The Social Network Movie has won 3 Oscar awards and was featured on 78 critics' Top 10 Movie lists for 2010.

It is a Silicon Valley Movie based on the book:  The Accidental Billionaires: The Founding of Facebook, a Tale of Sex, Money, Genius, and Betrayal.

This is a story about Facebook and how it all began to become what it is today and the lawsuits it faced till it became one of the most popular Social Networking sites with thousands of dollars generated daily.

It shows how the website became a social network for Harvard, Yale, Columbia, and Stanford Universities, and later to continents around the world.

Jesse Eisenberg takes the role of a Harvard University Student and founder of Facebook Mark Zuckerberg, and the roles of Eduardo Saverin and Sean Parker are taken up by other actors.


Betas is a comedy TV series about Silicon Valley produced by Amazon Studios.

Betas Season 1 shows us four friends with an idea to develop an app, BRB Beta, that can change the world.

They need Startup capital and investors to aid the development process but are faced with several challenges as is the case of most manufacturers.

Potential Investors will pull out and the app will be hacked after its launch, but will they still proceed in making their dream a reality and is there any future for the BRB company?

Watch to find out!


The Internship Movie features two fired Salesmen, Owen Wilson and Vince Vaughn, as applicants at Google who are in competition with other applicants for a position in the company.

Although they are much older than the rest and are not as skilled, they do not let these deter them from competing and also stop them from winning.


Jobs is a Movie about Silicon Valley based on the Life of  Steve Jobs.

He is one of the Founders of Apple Inc., a California-based company whose developed products include the iPhone, iPad, Macintosh, Apple Watch, and macOS.

The movie begins with him displaying the iPod at an Apple meeting before recollecting when he dropped out of college due to high fees.

It proceeds to a later stage in his life where he develops Apple Computer (Apple I) with Steve Wozniak and updates it to Apple II from a Studio in his Father's garage.

This Movie also portrays Jobs' relationship with his daughter who he did not acknowledge at first, but later did by developing and naming 'The Lisa' after her and taking responsibility for her welfare.


If you're a lover of tech gadgets, then you may want to watch these movies about Silicon Valley in order to know how your favorite manufacturers began.

Their challenges and how they overcame them will be an encouragement to you not to give up in your quest in life.

When no one believed in them and they were also filled with doubts occasionally, they never relent their efforts.

You can get Silicon Valley Movies, TV series, and Documentary on Fzmovies and  Netflix.