iPhone 5S Price in Nigeria: The iPhone 5S was released in September 2013 by the California-based smartphone manufacturer, Apple.

Five years later, it isn't an uncommon smartphone among mobile enthusiasts as its still standing strong in competition against smartphones from other brands released years after.

While this does not come as a surprise as is the case of most Apple iPhones given their unique design and features,

How much is iPhone 5S in Nigeria?

Comparing the latter price to the current iPhone 5S price in Nigeria currency, you'll agree with me that users can get this same smartphone at a much lesser price.

I guess here's where the saying 'A patient dog eats the fattest bone' waltz in.😖

Who do we have to thank?

Advancements in technology and its ever changing trend, since nowadays you can get a better model of the iPhone at around the said £549.

Do you intend buying the iPhone 5S anytime soon?

Are you a die-hard fan of Apple smartphones?

The given below is the iPhone 5S specs that will inform you about the device's features, capabilities limitations, and generally, the level of performance to expect from an older iPhone of this kind. 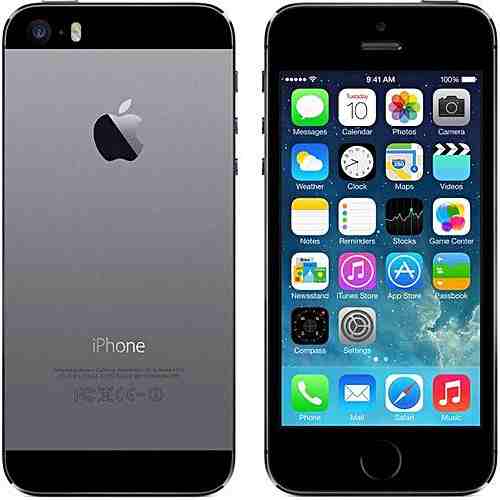 The iPhone 5S is a successor to the iPhone 5, sporting a design similar to the latter, but with improvements in cameras, processor and security.

The iPhone 5S was the best selling phone on all major U.S. carriers in September 2013.


Here's an overview of the iPhone 5S Gsmarena features:

The Apple iPhone 5S comes with a 4-inch screen with a resolution of 640 x 1136 pixels and pixel density of 326 pixels per inch.

This screen size is small, boasting of one of the smallest screens on an iPhone where we've seen screens of over 5.0 inch like the 5.8 inch on the iPhone X.

A smaller screen but with a decent resolution and pixel density makes details displayed on the screen to be of sharp quality and appealing to the eyes.

There is also a Corning Gorilla Glass and oleophobic coating on this smartphone to give its screen strength against scratches and make the oil from one's fingertip invisible on the screen.

Judging from the specs above, it is lighter than its successor, the iPhone 6 at 129g, but thicker.

This model of the iPhone is available in color options of Gold, Space Gray, White, and Silver.

Instead of the typical home button found on other older models of the iPhone, the iPhone 5S's home button also comes embedded with a fingerprint sensor for biometric authentication.

This makes the 5S one of the first smartphones featuring a touch ID functionality, which has now been emulated by other brands just as its unique design was.

This security feature allows you to unlock the device with your unique fingerprint as well as authenticate purchases on Apple app store and iTunes store.

The iPhone 5s runs on a 64-bit dual-core Apple A7 processor with a processing speed of 1.3GHz, an M7 co-processor and PowerVR G6430 GPU.

It also runs on 1GB of RAM which in 2013, would've been considered large since most apps and games back then weren't as sophisticated and didn't require a lot of memory to run as is the case lately.

There is an internal memory storage of 16GB, 32GB, and 64Gb on different variants of the iPhone 5S., and the storage on either cannot be expanded with the use of an external card.

In terms of OS, the iPhone comes pre-loaded with Apple's IOS 7 designed by Jonathan Ive, and this OS can be updated to the latest iOS11 to allow the smartphone have a more friendly user interface.

The iPhone 5S camera features include an iSight 8MP rear camera with a f/2.2 aperture and a 1.2MP front camera for video calling.

These camera resolutions are the same as its successor, even though the later can offer better pictures due to its more optimized sensors with features such as Focus Pixels and Panorama.

The iPhone 5S battery capacity is 1560mAh, and it can support 10 hours of talk time and standby time up to 250 hours while on 3G network.

This smartphone supports the use of only one SIM, as is the case of all iPhones ever made.