This phone is a variant in the new S series that also features the base model S11 and the S11s.

The order of naming of these smartphones and the unique difference between each, is similar to that given by Infinix Mobility with their Infinix Hot 4 Lite, Hot 4 and Hot 4 Pro.

In comparison, mobile enthusiasts can still get the same device but in variants with slight disparity.

It is the least specced variant of the trio and as would be expected, the least expensive.

Judging from the review of the Gionee S11 Lite specs and price outlined below, you can decide if this is your next smartphone and most especially, your choice variant. 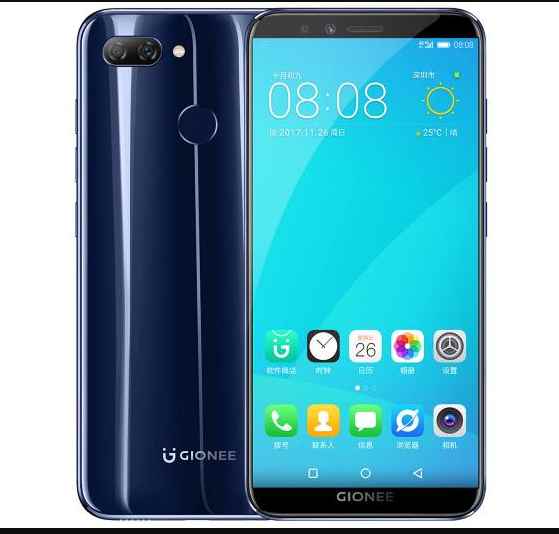 This screen size and resolution are similar to the Xiaomi Redmi 5 and Gionee Steel 3's screens.

A screen of this kind usually displays images and text in vivid and clear quality, at the same time providing a wide angle for enjoying games and movies.

The S11 Lite's body is made of metal to give it a premium finish and maintain its outer appearance for a long period of time.

A large device due to its screen size, but a thin and light one due to its weight and slimness.

You can operate the device for hours unending and carry about either in your pocket or bag without it feeling like an extra load.

To allow you purchase the smartphone in your favorite or most preferred color, the Lite has been made available in color options such as Black, Gold, and Dark Blue.

There is a rear embedded fingerprint sensor on the Gionee S11 Lite, adding an extra layer of security that is better and easier than using Pins, Passwords, Patterns and Apps to lock your Android phone.

Powering the Gionee S11 Lite is an Octacore Qualcomm Snapdragon 430It processor with a processing speed of 1.4GHz.

One can expect a high level of performance because the processor embedded on this device is not only speedy in handling several tasks within seconds but can handle tasks that put a lot of work on memory.

Coupled with this processor for an enhanced multitasking experience, is a RAM whose capacity is 3GB.

Several apps can be opened at a time, graphics intensive and memory hungry games ran and other basic operations can be carried out on the S11 Lite, thanks to its more than average RAM size.

You also get an internal memory storage of 32GB which can be expanded up to 128GB using a microSD if in any case, you exhaust the inbuilt memory (which I don't see happening anytime soon, not unless you watch a lot of p*rn😖).

With regards to operating system, you still get the same Android Nougat OS that is common in most smartphones released in 2017;

An OS that works hand in hand with Gionee's Amigo 5.0 User Interface to provide an easy to use and navigate smartphone environment.

At a later date, users may be able to update their Gionee S11 Lite to the latest Android Oreo.

The Gionee S11 Lite features two cameras at its rear, where one has a resolution of 13MP and the other, 2MP.

At the front, is an optimized 8MP camera for taking selfies and making video calls.

The Gionee S11 Lite has a battery capacity of 2,970mAh which is higher than average the capacity of a smartphone released in 2017.

Its non-removable battery can provide long hours of use, lasting well over a day on moderate usage.

The use of both SIMs cannot be done simultaneously since the second SIM slot also serves as an expansion slot for a microSD card.

Users of this smartphone can either use both SIMs or one SIM and a MicroSD card at the same time.

Other connectivity options of this smartphone include Bluetooth, USB OTG, WIFI, 3G and 4G Network, GPS, and FM.

Currently, the Gionee S11 Lite cannot be purchased in Nigeria and other African countries like Kenya, Ghana, and Malaysia since it is still unavailable in their online and offline retail stores.

Deducing from this price and the current exchange rate, the Gionee S11 Lite Price in Nigeria will be about 89,000 Naira.