Their China-based manufacturer, Gionee, deemed it fit to design variants of the same model of a phone, but with unique features that set them apart from one another.

This way, different classes of mobile users can get most if not all of the features embedded in each, but at best possible price.

What's with the Gionee S11?

As the base model of the trio, this variant in comparison with the others is the more expensive and more specced.

Its features are better than that of the S11 Lite, but the S11s would give it a run for its money.

You get features that are common in all three models; features like Processor and Operating system while on the other hand,

You get features that are only unique to this particular model; features like RAM size, battery capacity, screen size, and resolution, amongst others.

As one of the rare smartphones in the world to feature 4(four) cameras,

Can the Gionee S11 specs and real-life operation make it the best option among the trio when its price is correlated with its specs?

As the more enhanced variant, can it outperform the S11 Lite?

Can it be a device that makes you a proud owner of a Gionee smartphone?

A conclusion reached is one that is best done after taking a look at the review of the Gionee S11 Gsmarena specs outlined below. 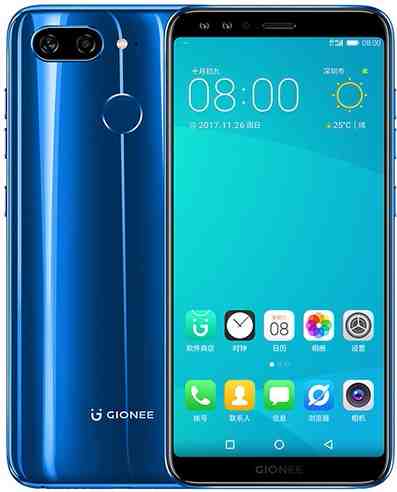 The Gionee S11 features high-end specs in its external build and design, hardware, software, and cameras. Here's an overview of the Gionee S11 Gsmarena features:

This screen is quite large, hence the smartphone can be classified as a Phablet that may be best appreciated by lovers of large devices.

While you get a widescreen that provides ease of typing, gaming, and reading, you can be less bothered about the quality of text and graphics produced since the screen resolution and PPI are quite high.

Whether you are viewing up close or from a distance, you can still make out the details on the screen at a very appreciable quality.

According to Gionee, with its FullView Display you "See more of your world up close and personal".

The 2.5D curved edges of this smartphone make it comfortable in hand and allow it to sit comfortably while being operated or when held.

While this can be attributed to its larger build and battery, you can still expect a not so heavy device even though its weight won't go noticed.

Colour options which this smartphone is made available in to make it a stylish device are blue, gold, and rose gold.

For security, there is a fingerprint sensor mounted on the device's rear and also a private vault on this smartphone that allows you hide your files and apps.

With these, you no longer have to secure your phone with PINs, Passwords or use third-party apps, as either can ensure that your private files stay hidden and unauthorized users do not have access to your phone.

The Gionee S11 runs on an Octa-core MediaTek Helio P23 processor with a processing speed of 2.5GHz.

This processor can perform operations more speedily than that of the S11 Lite's processor and will result in more tasks being completed in a shorter amount of time.

This smartphone is also powered by a RAM whose capacity is 4GB; a size that is significantly larger than the 3GB found on its Lite variant.

A RAM of this size makes for seamless multitasking with a wide range of apps and games.

Aside from the large RAM, there is also an inbuilt storage of 64GB that is expandable up to 256GB via a microSD card.

This storage is twice the size of the latter, hence whatever you stand to enjoy on the S11 Lite, the S11 can provide twice as much in terms of performance, multitasking and storage.

On the other side, the S11's expandable slot is a hybrid slot meaning that you can either use a second SIM or microSD card in the phone.

Looking at the Gionee S11's operating system, there is the usual customized user Interface from Gionee called Amigo.

This UI version 5.0 is layered onto Android 7.1 Nougat to provide an easy to use and navigate user environment, as well as good battery power and memory management.

Looking at the Gionee S11 camera features, this smartphone sports dual cameras at its front and rear.

Now if that isn't awesome, I wonder what is!😏

Why four cameras instead of the traditional two?

Working with two cameras simultaneously where one captures a picture in color and the other in monochrome results in images with great quality and ones that are more life-like.

Like other devices in the series, the S11 is a camera-centric smartphone for the self-obsessed and selfie lover.

But wait for a second:

Compared to its predecessor, the S10, these cameras resolutions have been stepped down, but then, a bigger number does not always mean something is better than the another, duly, the same may hold for the S11.

The S11's camera is far from being tagged 'unremarkable'.


The Gionee S11 battery capacity is 3410 mAh and the battery is non-removable.

One would've expected a capacity that is at least 400mAh on this variant, given its large display screen that will tend to drain more battery power, but disappointingly, that is not the case.

On a bright side,

The capacity is above average and there's Android Nougat power saving features to rely on.

The S11 Gionee smartphone comes with fast charging support to enable it powerfully within a few minutes.

It supports the use of two SIMs which can only be done at the same time when a micro SD card is not used because of its hybrid slot.

Other connectivity options of this smartphone include USB OTG, WIFI, Bluetooth, GPS, 4G network, and FM.

In Nigeria, as with some other African countries like Kenya, Ghana, and Malaysia, the Gionee S11 is not yet available.

When it is available, it can be purchased from reputable online stores in either country.

Deducing from this price and the current exchange rate, the Gionee S11 price in Nigeria will be about 140,000 Naira (tax excluded).


Gionee has always gone all in, in terms of battery, but with the S11 smartphones, I think they've held back which is quite the surprise.

Let's hope the battery capacity of each variant of the S11 can supply enough juice to its power-hungry screen and still offer a battery life of over 1 day.

The Gionee S11 is an eye catcher starting from its design to its inbuilt features.