Xiaomi Redmi 5 Gsmarena Specs and Price: Released by the China-based smartphone company in December 2017, is the Xiaomi Redmi 5.

As a developer of one of the best Android devices that are currently in competition with Samsung, OnePlus and Huawei devices, Xiaomi has once again flaunted their best features in this smartphone.

The Redmi 5 as the latest smartphone in the Redmi series that also features the Redmi 5A, 5S, Y1 etc. is a  successor to the Redmi 4 smartphone that was released early last year.

It has a remarkable processor instead of the MTK processor of stock Android phones, features a full view display, eye-catching design, and as would've been expected, a large battery capacity.

Not to be left out,

Are its cameras whose image and video quality makes the Redmi 5 a good choice for the social enthusiast, selfie enthusiast, and the self-love.

These and much more features as outlined below will make this smartphone a competitive device in 2018, and given its price tag, it might easily warm into the hearts of mobile enthusiasts.

The Redmi 4 is a popular choice among smartphone users in China, India, Malaysia, Nigeria as with some other countries, and now the Redmi 5 as a better device of the duo might even gain more popularity.

How and when that will happen will be determined by its real-life operation. 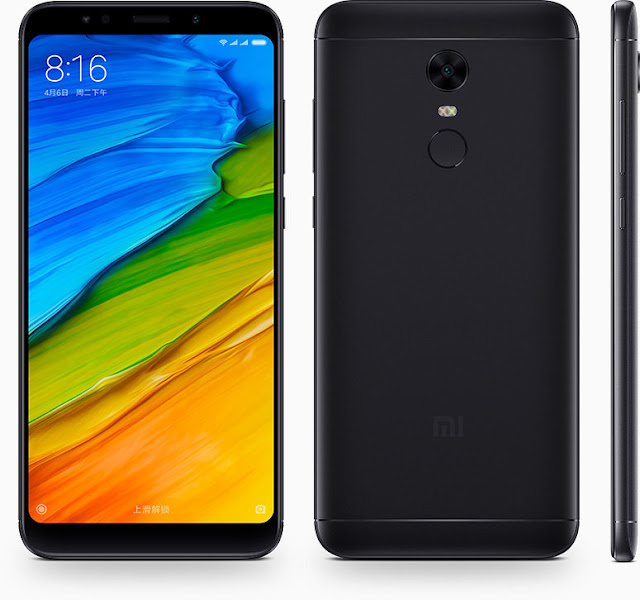 The screen size means this is neither an overly large device at 6.0 inch nor a small one at 5.5 inches.

You get a screen wide enough to enjoy your movies and games, and read texts and type conveniently; a screen that is protected from being marred by cracks and scratches with a Corning Gorilla Glass.

For lovers of devices with a large screen, this is your smartphone, and for those who thought the Infinix Note 4 is too large, then you might want to steer clear of this beast.

The Redmi 5 also has a metallic build as is the case of most mid-range devices.

Its build material gives it a premium look and sleek design, one that will stand the test of time due to its durability.

Judging from its weight and dimension, one can expect a very light device because the Redmi 5 is not quite on the chunky side.

There is a fingerprint sensor mounted at the device's rear, and this fast and responsive sensor can ensure the user's data and files are not tampered with by unauthorized users.

The Xiaomi Redmi 5 features an octa-core Qualcomm Snapdragon 450 processor with a processing speed of 1.8GHz.

For rendering graphics especially in graphics intensive games, is an Adreno 506 GPU.

This processor is fast and powerful enough to provide a high level of performance without occasional lags and hangs.

The Inbuilt storage can be expanded up to 128GB with the use of a microSD card in its expansion slot.

On either variant of the Redmi 5, there is adequate RAM to handle multi-tasking needs, and depending on your purchasing aim,

You can go for the one that best meets it as each variant is correlated with a different price tag (the higher the RAM, the higher the price).

For its operating system, this smartphone is powered by Xiaomi's customized user Interface MUIU 9 based on Android 7.1.2 Nougat.

The Xiaomi Redmi 5 camera features include a rear and front camera with a resolution of 12MP and 5Mp respectively.

The Redmi 5's cameras are capable of recording videos in 4k resolution, hence you can expect videos captured to be of great quality.

The battery capacity of the Xiaomi Redmi 5 is 3,300mAh, and this battery is non-removable and based on Li-Po technology.

Even though of late we're used to devices with at least 4,000mAh battery, this capacity of the Mi 5 is not a total let down as it still promises long hours of talk time, and standby time.

Like its predecessor, the Xiaomi Redmi 5 is also a dual SIM smartphone with support for two Nano SIMs only when the second slot is not used for a Micro SD card.

What does this mean?

Now if that's something you can wrap your head around, you'll have to prioritize as to which to use at any given time.


The Xiaomi Redmi 5 was launched in December 2017.

In Nigeria and other African countries like Ghana, Kenya, and Malaysia, the smartphone is available and can be purchased from reputable online and offline stores in either country.

The Xiaomi Redmi price differs for each variant of the smartphone, where the 2GB, 3GB and 4GB variants cost about $120, $135 and $174 respectively.

Deducing from this price, where you purchase the smartphone and the current exchange rate, the Xiaomi Redmi 5 Price in Nigeria ranges from 45,000 Naira to 75,000 Naira.