Tecno Camon CM Specs and Price: The Tecno Camon CM (C MORE) is the latest variant in the Camon series and a successor to 2017's Camon CX and CX Air.

It is a midrange device from the Chinese smartphone company, Tecno Mobile (in partnership with Manchester City), who through years of developing smartphones have garnered experience to design ones with competitive features.

Like Infinix and Gionee devices, they seek to offer a smartphone with an acceptable level of performance, but at the best possible price.

The Camon Series is one of the most popular series in the Tecno Line of smartphones; the other being the Phantom Series.

While a Series is targeted at a certain class of users, the Camon is at selfie lovers who want a device that can offer great camera quality whether in bright places or lowly light areas.

So far, the Camon devices have been quite impressive most especially the Camon C8.

But then, as much was gotten from the C8, more was expected from successors like the C9 and CX, which was not the case.

Hopefully, this is a better device than its predecessors, offering unique features that will make it stand out from other devices in the Camon Series and make it the best option in this series. 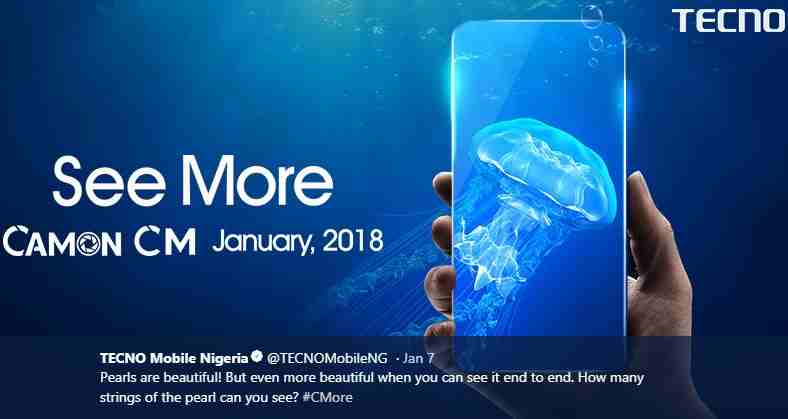 For a start, its name C MORE gives us the first hint that this is a phone with a large display which makes it easier to be viewed and read from because you SEE MORE at a glance.

According to Tecno, you get the eyes of an Eagle because its clear and bright screen brings out every detail on the screen be it under the sun or indoors.

Like the Camon CX, you get a 'Feast for your eyes'.

If that's the case,

This full view display screen is neither small nor too large, which translates into ease of usage.

At its size, you can conveniently type, enjoy videos and games, and still carry the device about without it feeling like a huge chunk of 6.0 inch.

For its build, this smartphone will sport a metallic design with curved edges to maintain the premium and sleek look of its predecessor and also give a comfortable feel when the phone is held.

Whether it'll be a lighter device or a heavier one compared to the CX, one at this point can only look forward to its impressive display.

Although the Camon CM was set for launch on January 8th, up until now, we are still uncertain about the processor made of this device.

But then, one should not expect any surprises!😏

What to look forward to?

An Octa-core MediaTek Processor with an acceptable level of speed.

Users can also expect this new variant to come with at least 3GB RAM for multitasking capabilities and an internal memory capacity of  32GB that can be expanded with a memory card up to 128GB.

You get a large enough RAM that can eliminate potential lags and hangs and an inbuilt storage to ensure you do not run out of free storage especially when you need it most.

As it is the case of most Tecno devices, the memory expansion slot of this device is not a hybrid one, which translates into simultaneous use of a MicroSD Card and a Second SIM.

You may be wondering, What about the Camon CM operating system?

This OS is user-friendly, has memory and battery management features, and offers shorter launch times for your favorite apps.

Since Android 8.0 Oreo has been rolled for non-Google devices, the Camon CM'S OS will be upgradeable to the latest Android OS even if it does not come pre-installed on it.


For its most promising feature, the Tecno Camon CM will sport a back camera and front camera with a resolution of 13MP and 13MP respectively.

With cameras with these resolutions, images captured on this device will definitely have great quality.

The Camon C8's camera is good, the CX better, now will the CM's camera be the best of the trio?

One can only conclude when images captured on each is compared for better quality, because from a 16MP camera as found on the CX to a 13MP on the CM might not go down well with some users.

This device's camera is worth the hype and anticipation!

We may be getting a device with dual front cameras.

The Tecno Camon CM battery capacity is expected to be 3050mAh.

This capacity around 3000mAh is in the same range as that of the Camon C9's and CX's battery, but then, a meaningful increment (400mAh) in the capacity of this variant's battery would be a welcomed change.

Users can expect the same battery life as of its predecessors if not better.

On a full charge, you can get over a day's use on a moderate operation of the device.

This smartphone is also rumored to come with a USB TYPE C port to support fast charging and fast file transfer speed.

A few minutes charge to give long hours of battery use and less time spent moving files from your PC to the phone and vice versa via cables.

Some connectivity options of the Camon CM include Bluetooth, 3G, 4G, WIFI and its sensors are not limited to Ambient light, Gravity, and Accelerometer sensors.

Currently, the smartphone is unavailable in offline and online stores for purchase, but when it is available, one can pre-order it from stores like Jumia and Konga.

As confirmed by Tecno Mobile on their official Twitter page, the Tecno Camon CM Price in Nigeria is set at 47,000 Naira.

This price may vary depending on where you purchase it and when.

The Camon CM specs below are not yet verified on Tecno  Mobile's website because information about the device is currently unavailable.

The given below, are only speculations as to what this device will feature judging from its predecessors.

In time, these specs will be updated to meet those provided on the official website once the general public is informed.

Tecno Mobile is aware of the current trend in technology and the competitive nature of smartphones from other brands, hence this will not be a device to disappoint.

Users expectations for this device is high which makes it a must for the Camon CM's software and hardware to be nothing more than impressive.

A verdict reached without the actual specs sheet and without seeing the real-life operation of this device would be a biased one.