Now if the above statement is false, I'll like to believe those who do not, have not found any of the best android games offline, that can catch their fancy.

A game is for the relaxation of the mind, body, and soul, although some mind nibbling games like Suduko do the opposite.

There are thousands of games on Google PlayStore, and more are being developed on a timely basis; categorized into Sports games, Mind games, Action games, and Adventure games.

While there are several games, it becomes difficult to make a choice between which games to download since some are good and quite entertaining, while others will get deleted 5 minutes after download.

One can either use the ratings of the game to judge, settle for the Editor's pick, or get a recommendation from a friend, which makes finding the right games easier.

One more way you can save your time and mobile data is to get the list of the best Android games in 2017 from the net,

And here's where we've got you covered!

Given below,  is a list of trending Android games in 2017 and the best in the category they fall into.

They feature great graphics, sound, and tactics, and the requirements to install each on your Android smartphone are:

Also Read: How to Create Recycle Bin in Android Phones
Is Hindi, Oriya, Marathi Typing Possible on Android Phones?
Is It Good to Buy a Phone With Android 5.1.1. In 2017?

Although these three requirements are not stringent, as these games can still run on devices with lesser specs, a higher level of user experience can be achieved when these three are in place.

There are others but not worthy to be mentioned because a device with these three specs will definitely be running on one of the latest Android OS and will have a good screen resolution. 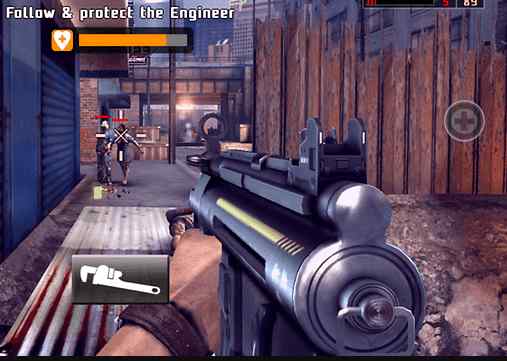 These best Android offline games will ensure you are no longer bored when you've got no data or Wi-Fi to surf the net as long as your phone is powered on.

To show off your driving skills and perform stunts you'd wished you could in real life, here's Real Racing 3, a next-generation mobile racing game for Android and the most advanced version of the standard Real Racing game.

It has several game modes where you can speed on tracks using timed intervals and also compete against a friend with its real-time multiplayer technology.

With cars from different manufacturers and over 100 million downloads already, this is the best racing game for mobile phones.

To play this game without lags and hangs, it is advisable to have a free memory space of at least 1.5GB.

Like Real Racing, Shadow Fight is one of the most downloaded Android games on Google Play Store with over 40 million users.

It features several animated Martial Arts to enable you to defeat your enemies and close the gate of shadows.

Its lifelike animations make the visuals look very real and judging from the number of downloads and high ratings, this game is worth the try.

3. The Battle Of Polytopia

The Battle of Polytopia is the best Android strategy game with quality graphics and 4X control strategies namely: eXplore, eXpand, eXploit, and eXterminate.

The logic behind this game is to rule the world by leading an AI tribe, bring about its civilization,  relating to the neighboring tribes and conquering other evil AI tribes.

All these tasks must be accomplished within 30 turns which gives your final score in the game.

The tribe you choose (for instance the Quetzali tribe) determines the Adventurer you will be in the game.

The graphics on this game is good as well as its mobile-friendly user interface.

Broken Age is a puzzle adventure game that tells a story of two teens, Shay Volta and Vella Tartine each struggling in similar situations but in different worlds.

You can easily switch between the major characters and be an adventurer in a different way, in the same game.

Although last updated in 2015, the graphics on this game is still good as well as its audio output.

Game type: Card and Board Game

If you're good with logic, then check out Hearthstone Heroes of Warcraft, the best card & board game for Android 2017.

In the Heroes of Warcraft game, you can fight duels by choosing to be a hero among nine great ones like Thrall, Jaina Proudmoore, Uther or Gul'dan, or even be a villain.

Each of these heroes has their own unique abilities and different powerful cards to summon minions, sling spells, and take control of the battlefield.

You can either practice with computer-controlled heroes or other players to win prizes.

Not limited to only Android, this game is also available on iPad and Computers, and it supports languages like English, Deutsch, Français, Español (Latinoamérica), Español (Europa) and Italiano.

Get entertained with Table Tennis Touch for Android, a ping-pong game you can play with your friends online.

It is best to table tennis game for Android and has been Google Play's 2016 award winner.

You may think this game is simple and involves just bouncing a ball back and forth on a table, but the level of precision needed to win the 13 different ping pong challenges, is high.

There are several hand gestures in this game that can render serve spin and powerful smash shots.

Grand Auto Theft GTA has provided several cities such as San Andreas, Vice City, GTA III, and Chinatown, for you to become a Crime Lord.

GTA San Andreas tells a story of Carl Johnson, a young man in the early 90's who finds himself in an environment filled with crime, and bad circumstances that will determine the path he chooses to get out of them.

As with the others, in GTA San Andreas you steal cars, blow them up and shoot anyone that stands in your way on the streets of Los Santos, Las Venturas, and San Fierro.

This game has graphics with high resolution coupled with lighting enhancements, and it is available for PC, for those who'll like a larger screen to play it on.

It is also compatible with the Wireless Game Controllers, and some Bluetooth and USB gamepads.

World Series of  Poker is an Android gambling game for skilled poker players who are ready to bet even when the stakes are high and also know when to call a bluff.

If you like to toss a coin or roll a dice, then here's the best casino and dice game in 2017.

It can be played with offline or online opponents to get one's name on the world's Leaderboard or a virtual machine instead of a live opponent.

You can even turn it into an online poker night with your friends, show off each other's skills and improve them with World Series of  Poker.

A currently trending game on Google PlayStore is Golf Clash, and you'll be surprised at the number of Golf fans we have out there judging from the downloads and reviews.

This is an online game that requires you compete with other players online and it lasts with just one hole.

There are thousands of live players online for you to compete with, and select the ones that can meet your challenge, giving you a match to look forward to

Coins and Trophy points are placed as a wager and whoever emerges the winner, takes it.

There is also the added benefit of having your name on the world's Leaderboard.

The game is quite entertaining and even incorporates a chat feature that uses Emoji, allowing competing players to conveniently chat with each other.

Super Mario is an action game that does not involve shooting this time but navigating through obstacles to win coins.

There is a Toad Rally mode to allow users compete with their friends and win toads and coins,

A Kingdom Builder mode that will enable you to spend the coins you've acquired to build a kingdom for yourself and use more characters like Luigi and Princess Peach.

There are 24 levels in this game, but only the first level is free for trial and the other levels will
require that you make a $9.99 payment to unlock them.

Alto's Adventure is an action game that was released in 2016.

It features a character Alto, snowboarding down the mountainside while dodging boulders and jumping over chasms.

Several stunts you can pull in this game, levels you can compete in and a zen mode that lets you do less work while still sliding down the mountain.

Modern Combat 5 is the latest version of the game and has been trending for years now.

You can show your combating skills with the help of this game, use several shooting weapons in the single-player mode and multiplayer mode.

Sky Force Reloaded allows you to be the military personnel you've always wanted embarking on missions and crossing the enemy's lines.

Each mission completed earns you stars and medals to reward your efforts.

You become the principal character, Police Chief Jim Hopper searching for a missing child, which ends up in many twist and turns.

Another action game which is more of a story game that can keep you entertained is Death Point.

It features 10 different chapters each carrying its own level of challenge.

In this game, you are a spy in a post-apocalyptic world, and your target is to take down your enemies and their systems while being a survivor, to enable you to win in the end.

Your Android smartphone has been built to give you an enjoyable experience, how and when that happens depends on you.

With these best Android games of all time installed on your phone, your day is a step away from being better.

Android app markets such as AppMirror, the mob.org and Apkfun also offer these games for free download.