How to Install the Same App Multiple Times on Android

Whatever your reason is for wanting an instance of another app on your phone, here's how to install two different versions of the same app in Android and how to save/share cloned apps in Android.

If you're a person with a strong online presence and several accounts on social networks like Facebook, Whatsapp, Instagram etc, you will definitely have the need to maintain more than one account on your phone, and multiple accounts require multiple logins.

Unlike apps like the Gmail app for Android that allows login into multiple accounts, there are several others that do not.

Having to login into each account can be time wasting, where some login attempts may even be considered as suspicious by the network, which therefore brings the need to conveniently login on a separate app but from the same Android device.

With the use of applications that can clone apps on Android or create an instance of apps and games in Android. Given below is a list of some that are quite effective in duplicating apps in Android.

Here is a list of the best app cloners for Android and are not limited to the ones listed below as you can find several others on Google Play store. Since it's apps we'll be using, rooting for your Android is not required before this can work.

For your first app,


With Parallel space, you can duplicate an app and sign into individual apps at the same time from your Android. When the original app is updated, the cloned app also gets updated.

Multitasking between the same apps is made possible with parallel space where you can switch quickly between the original and the newly duplicated app. 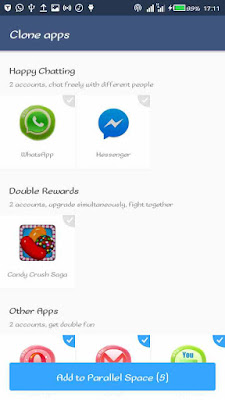 You can access the cloned app directly from the Parallel space app, and the original app from your device's app drawer.


You can duplicate apps on your phone using this app as well. Lucky patcher creates an apk file of the original app, where you can decide to install on the device again or send to another device.


As the name implies, this app duplicates most applications on your Android phone. Unlike Parallel space, you can only clone certain apps since not just any app can be cloned by it.

The duplicated apps run as well as the original app without glitches.

AppCloner comes with free and paid version where the paid version allows you to change the icons and the color of cloned apps to separate them from the original apps.


2Face app can be used to replicate apps in android. It also offers additional features such as an incognito mode for private web browsing.


Like the aforelisted apps, AppClone also provides the basic function of cloning apps in Android. Other than cloning, you can set privacy control to each app, thereby preventing unauthorized access to apps you want to be hidden on your phone. The cloning is not restricted to only apps, but you can clone your favorite games as well.


Each of these apps can create the same app multiple times on your phone. You can download each and see which works best for you.