You may be wondering, Is Hindi, Tamil or Marathi typing possible on Android phones?

How can I type in Indian regional languages on Android?

Depending on who you're trying to communicate with, using your native dialect such as Hindi is usually much easier to type in.

Not only that, your information is precise enough to be understood clearly especially if the recipient is not a native speaker of English.

A few years ago, the Android keyboard did not have Hindi language as part of the default languages whereas there was French, Spanish, Chinese, and the likes, but no way of automatically setting your Android default keyboard language to Hindi.

If one must write in Hindi, then they must first go through the process of rooting their phones since some devices did not support Hindi script.

But now, most device do given that there is an in-built support for Hindi in some Android devices.

Even though there is a built-in system, it would mean using a Hindi-specific keyboard or setting Hindi as the system language, which might not be preferred by most people.

This is because the entire system language of the phone or tablet is bound to change, and you cannot use two languages at the same time without going into the device's settings to change the default language.

So, is there a way you can type using Hindi on your Android device but still maintain the default text language of your Android?

While chatting, texting etc. you can write on WhatsApp, Skype, Facebook, and send SMS in Hindi Language using your Android device.

By using either third party themes/applications that come with specialized keyboards or manipulating one or two functions on your smartphone, you can type in Hindi language on Android phones including tablets.

Whichever works best for you, either will let you type directly using Hindi or convert text typed in English to Hindi.

Below are some of the ways on that will show you how to customize your text, chats and messages to your preferred Hindi language.


Also Read: 3 Simple Tips for Turning Your PC Into a Gaming Machine
How to install Google Pixel Launcher latest update for any Android device


How to Type on Android Phone in Hindi


Here's how to type in Hindi and other Indian languages using English keyboard.

We'll be using the Google app, Google Indic Keyboard, a hindi keypad for android mobile that allows messages and emails in Hindi to be typed on Android phones.

This app offers English and Hindi keyboards, and transliteration from English to Hindi using Devanagari alphabets.

If your phone supports Hindi, then it can read this text  नमस्ते correctly, and the application will work well.


The Google Hindi Input Keyboard will be displayed as one of your available keyboards, 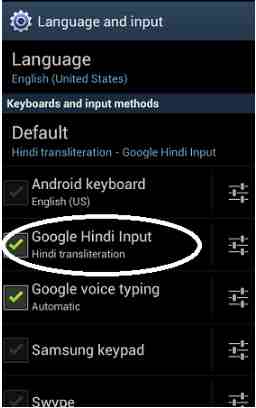 How does the Google Hindi Input keyboard work, and how can you the use Google indic keyboard?

When the Globe key on the keyboard is pressed, one can move from typing in English to typing in Hindi.

Also, switching the keyboard from English to Hindi offers three basic functions which are:

To type directly in Hindi,


To type directly in English (Hinglish) to be converted to Hindi or toggle between transliteration modes, 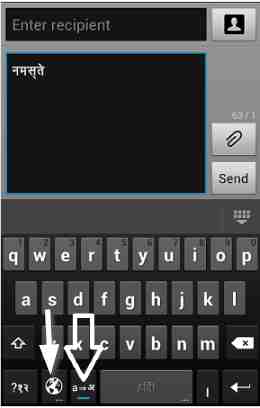 Not only will you be able to type in Hindi on devices like your Samsung j7, Galaxy S2 and S3 grand with this keyboard, but other Indian regional languages like  Punjabi, Tamil, Telugu, Malayalam, Bengali, Odia, Kannad, and Gujarati.

It gets better or worse:

You can also post on Facebook, Twitter, Whatsapp and the likes with either English or Hindi, and also use both languages at the same time just by switching right from the Google indic keyboard.


To customize the default settings of this keyboard,


On the Google Hindi input, click on the 'Settings' gear icon and customize the following functions,


The steps above on how to enable Hindi keyboard in android phones, tablets and computers will enable you type in your most preferred language.


Also Read: How to Transfer iTunes Music to Android Device
How to Change Windows Password Without Knowing Current Password
How To Create Undeletable Unrenamable Folders in Windows