How to Create Recycle Bin in Android Phones

Is there a recycle bin on Android phones that allows deleted files to be restored?

Disappointingly at the moment, the answer is still no, there’s no recycle bin in Android!

Why the heck is there no recycle bin on Android devices?

Well, think of it this way,

Each time an erased file is stored, it means free space has not been created.

Without the memory being freed up from time to time via deletion, the lower the memory space gets.

This in-turn implies that new apps and files cannot be accommodated, and also your device may begin to lag and hang.

I don't care, how do I retrieve deleted files on Android?

We'll get there, but wait a second:

On more than one occasion, we have mistakenly deleted important files like Music, videos, text, contacts and even applications on our Android phones.

Other times, it wasn't really a mistake because we meant to delete them, but at a later time, we still had need for them.

The importance of a recycle bin on Android devices cannot be overemphasized especially If you've used a computer that you've been thankful for at some point because of its recycle bin.

How do you recover accidentally deleted files after you installed it on your Android device? or, have a recycle bin on Android just like on a computer's recycle bin?

Given below are steps on how to create a recycle bin in Android devices.

What does it entails?

Making use of apps that allow deleted apps and files on Android to be backed up in a separate memory storage.

Right from Android phones like Infinix, Samsung, Gionee, Google Pixel, HTC, Huawei etc, you can still get the same restore feature of a computer's recycle bin and recover permanently deleted files from an Android recycle bin.

You can also use these steps to hide files on your Android phone because you can recover them after deletion, and no one will know they were there in the first place.


Also Read: How to Change Windows Password Without Knowing Current Password
How To Create Undeletable Unrenamable Folders in Windows
How to Remove Blank Black Screen in Windows 8.1


Here's how to gain access to Android's recycle bin.


You can easily find it on Google Play Store with the name 'Dumpster – Recover Images and videos'.


After deletion, now what?

You will most likely want to restore the files you just deleted, so, to access recycle bin on Android using Dumpster


What else does the Dumpster App offer?

Other than the ability to delete and restore files, you can also manage the type of files that are to be stored in the Android recycle bin and their duration.

You can choose if you want Images, Videos, Audio, Documents, Other files, Apps and Apps Updates to be stored or only one of the aforementioned.

Keep in mind that apps deleted are actually still stored in memory even though they are not visible in your device, so the file type you should select should be important ones.

To specify the type of file to be stored, 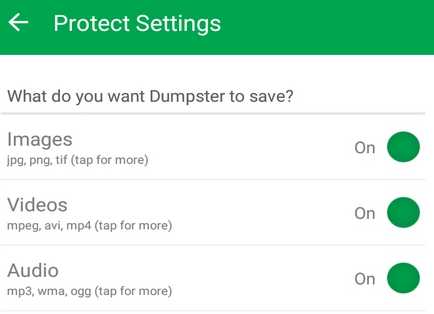 You can also specify how long deleted files are to remain in the recycle bin either for 1 week, 1 month or even 3 months, and the files will be automatically erased.

To specify the duration which deleted files are to be stored in the Android recycle bin,


This will allow you to set the duration

To manually delete the files/apps from the recycle bin, 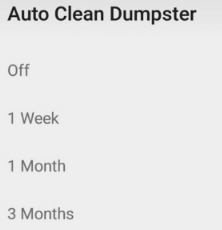 Although turning Auto-clean off means you will have to manually delete each app one at a time, there's another option that clears all the content of the recycle bin with a click, and that's the 'Empty Dumpster' Option.

Other than the Dumpster app, another Android app for recovering deleted files is the ES File explorer.


While the major purpose of this app is to manage your Android's files and folders, it can also restore deleted files back to your Android phone.

To make use of this app to enable the recycle bin for the Android devices, 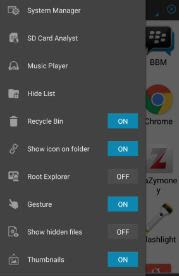 To unhide them in order to be able to restore them at a later time,


You can go ahead and delete any file on your Android phone, on accessing the 'Recycle' folder on the app, you'll see them

Other than using apps, you can recover permanently deleted files from Android by using Android data recovery tools such as dr.fone toolkit and EaseUS MobiSaver.


Unlike the apps, these tools may also require that you connect your phone to your computer in order to recover files on Android phones and tablets.

If your files were deleted before you installed the app, then there will be no way of recovering them using either of the apps already listed above.

These recovery tools will do a better job at scanning your phone and recovering even deleted WhatsApp messages.

Other than recovering deleted files, they can also recover files lost during factory restore, OS update and even rooting errors on Android phones.

But then, they have a trial and paid version which means they aren't free like the other apps,

You can download dr.fone toolkit for windows here to recover permanently deleted files on Android.