On the 13th of June 2017, HMD Globals launched its Nokia Android phones in India. These smartphones are called the Nokia 3, Nokia 5 and Nokia 6, and each is either a budget friendly, midrange or high end device. They are the first smartphones to be launched in the Indian smartphone market after the Lumia series and were first unveiled at Mobile World Congress (MWC) 2017 in Barcelona. Their manufacturer, HMD company has rights to manufacturer and sell Nokia devices and hence, decided to launch the Nokia 3, 5, and 6 in India. 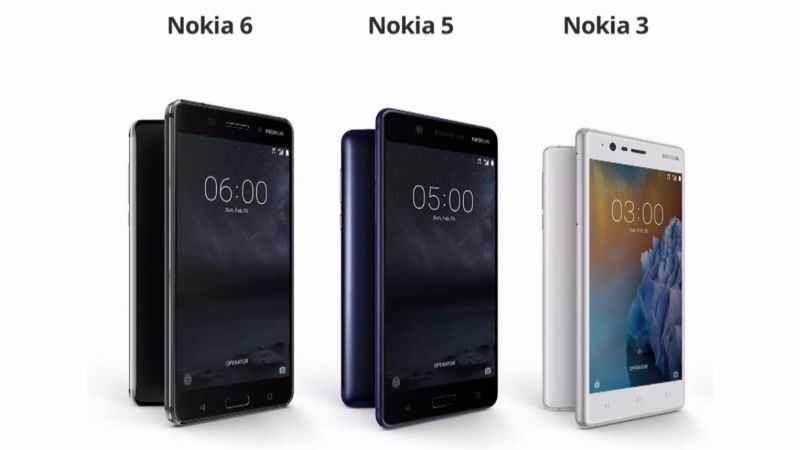 Over the past years, Nokia devices have been reputably known to be quality devices because they are well built, reliable and can stand the test of time. According to Nokia Director Global Portfolio Strategy and Planning, Pranav Shroff,


These phones are based on three principles -- real life experience, world-class design and regular Android updates that ensure we continue to deliver on the promise of quality and reliability that Nokia is known for.

Given that the brand name 'Nokia' is a legacy and has won the hearts of many, the wave of excitement stirred by the launch of these devices is not surprising.

The specifications of the Nokia 3, 5, 6 and the Nokia 3,4,5,Comparison is given below. Of the three smartphones launched, the Nokia 6 is the highest specced. Features that make it stand out of the trio include a large display screen, high resolution cameras, more RAM size and internal memory storage. On the otherhand, the Nokia 3 has the lowest specs. It has the least battery capacity, screen size and camera specs.

The Nokia 6 boast of a 5.5-inch screen with a full HD resolution of 1080 x 720 pixels and pixel density of 403 ppi. It also has a 2.5D Corning Gorilla Glass screen. The Nokia 6's body is made of metal and is available in several colour options including  Arte Black.

The Nokia 6 is powered by a Qualcomm Snapdragon 430 SoC processor with a frequency of 1.4Ghz. It has 3GB of RAM and an internal memory storage of 32GB that is expandable upto 128GB via microSD card. This expandable slot is an hybrid slot that can either accommodate a memory card or SIM. The 6 also runs on the latest Android OS, Android 7.1 Nougat and has a battery capacity of 3000mAh.

The Nokia 6 cameras have a resolution of 16MP and 8MP for the rear and front cameras respectively. The Nokia 6 is a dual SIM smartphone and other connectivity options include USB 2.0 port, 4G with VoLTE, fingerprint sensor, dual stereo speakers and Dolby Atmos audio enhancement.

The Nokia 5 is also powered by a Qualcomm Snapdragon 430 SoC processor with a processing speed of 1.4Ghz. It has a RAM size of 2GB and internal memory storage of 16GB that can be expanded upto 128GB via microSD card.

It runs on Android 7.1.1 Nougat and has a non removable battery whose capacity is 3000mAh. The Nokia 5 has a 13MP rear camera and an 8MP front camera. It is a dual SIM smartphone and other connectivity options include Micro-USB 2.0, NFC, and 4G with VoLTE support.

The Nokia 3 specs make it a budget friendly smartphone and the least specced variant of the trio. It features a 5 inch display with an HD resolution of 1280 x 720 pixels. There is also a 2.5 Gorilla Glass screen serving as a protection on the display. The Nokia 3 features a polycarbonate body with metallic frames at its sides and has a dimension on 143.4 x 71.4 x 8.4mm.

This smartphone is powered by quad-core MediaTek 6737 SoC processor with a processing speed of 1.3Ghz. It also has 2GB of RAM like the Nokia 5, and an internal memory storage of 16GB that is expandable upto 128GB via microSD card.

The Nokia 3 runs on Android 7.0 Nougat and has the least battery capacity of 2650mAh. The Nokia 3 rear and front cameras both have the same resolution of 8MP and 8MP. The 3 is a dual SIM smartphone that makes use of two Nano SIMs. Other connetivity options include 4G with VoLTE.

HMD Global said in a press release that pre-orders for the Nokia 5 will be carried out via selected mobile retail outlets across Chennai, Delhi NCR, Mumbai, Bengaluru, Ahmedabad, Chandigarh, Jaipur, Indore, Kolkata, Lucknow, Hyderabad, Pune, and Calicut. The Nokia 6 will will be sold exclusively via Amazon India, and the Nokia 3 can be purchased from physical retail stores.