Innjoo X3 Gsmarena specs: The Innjoo X3 is a low end android device released by the Dubai-based smartphone company, Innjoo. It is a member of the Innjoo Halo series and one of the lowly speced member of the series. Looking at the Innjoo X3 specifications and features given below, one will not expect any extraordinary capabilities from this device as it has been built to meet the basic requirements of a smartphone. Its low end features gives it its very much affordable price tag, hence making it a pocket friendly and budget friendly smartphone. 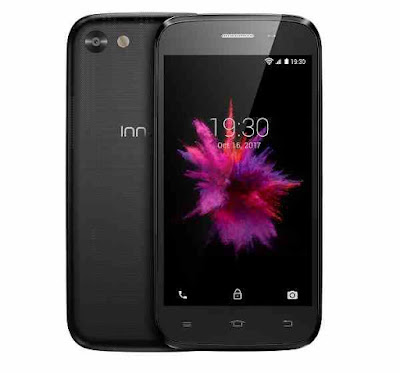 
For a smartphone in the low end segment, the Injoo X3 features a fingerprint sensor which most devices in its range do not have. Other than that, it boasts of  almost similar hardware and software specs with devices in its range. Innjoo X3 specs like the RAM capacity, display and size, resolutions of its cameras and processor closely match other devices in the low end segment. But then, there must be a slight improvement in its real life operation compared to other low end devices, because it can be categorized as one of the best affordable smartphones in 2017.

The Innjoo X3 features a 4.0-inch display with a resolution of 480 x 800 pixels and pixel density of 233PPI. Unarguably, the resolution is quite low, but for a screen of this size and its battery capacity, it might just be right for this device. The screen can provide a good viewing experience and will most likely not drain the battery at a faster pace. The smartphone has a weight of 105g and dimension of 124.5 x 64.5 x 9.4mm (height x width x thickness).

The size of the display makes this device easy to operate with one hand and carry about. You don't have to drop it at home while going out at night because this device is portable enough to fit into a pocket. The X3 has a plastic build which makes it shed the extra weight that could've been gotten from a metallic build. But then, the cost for this is the device's durability. Colour options available for the X3 are White and Black.

Innjoo X3 is powered by a quad-core Spreadtrum SC7731 processor with a processing speed of 1.3GHz. Its RAM size is 512MB and will most likely hang or lag when graphic intensive games are ran on it, that is if the device can even open the games. Android apps and games that do not put much work on the RAM will run on the device with little or unnoticeable lags. Minimal multitasking will also be carried by the device.

The X3 also has an inbuild storage whose capacity is 4GB. This storage can be expanded upto 32GB via microSD card. For a low end device, this storage space should be more than adequate to store the files, apps and games whose size is moderate. The smartphone runs on the Android Operating system, Android 5.1 Lollipop and has a Mali-400 GPU for rendering graphics.

The Innjoo X3 features a front camera with a VGA resolution of 0.3MP and a 2MP rear camera. By today's standard, these cameras are of fair quality. If you're purchasing this device, then the reason won't be its cameras whose resolutions are extremely low. Look on the brighter side, it can still capture an image that has a close resemblance to you, where you'll either be a few years older or younger. The front camera can be used for video chatting while the rear capture with its LED flash fixed focus feature can capture images whose quality are fair.

The Innjoo X3's battery capacity is 1300mAh and it is quite impressive for an entry level device. Since the device does not have lots of battery draining features and is combined with Lollipop's power saving features, the Innjoo X3 battery can last well over a day. The battery is removable and is based on Li-Po technology.

The X3 is a dual SIM smartphone that makse use of a Mini slot and a Micro slot. Other connectivity options of the device include Wi-Fi, Bluetooth 2.1, GPS, and microUSB. Its sensors include proximity, gravity and light sensors.

Before considering the specs of the Innjoo X3, one must first consider if its price tag goes hand in hand with what Innjoo is offering. Though the device does not offer much, it is one of the most cheapest android smartphones in 2017 and its specs are still worthy of note because of its price. You get a smartphone that can offer an acceptable level of performance as your standby phone before you acquire the real machine.
Tags: Features and Price, Innjoo, Innjoo X3 Specifications, Phone Specification, Phone Specification gsmarena