Huawei Y3 2017 Gsmarena Specifications, Features and Price: The Huawei Y3 2017 is one of the two devices launched in May 2017 by the Chinese Smartphone company Huawei, the other being the Y7. The Y3 2017 being an Huawei cheap smartphone, is a low end device in the Y series and a successor to 2016's Huawei Y3 II. While the Y3 II and Y3 2017 are the lowest speced entry-level smartphones in the series, this new variant has better specs than its predecessor. 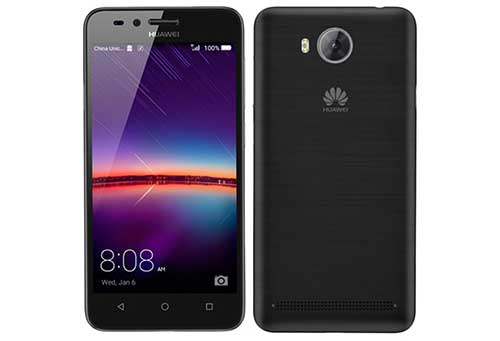 
When the characteristics of Huawei Y3 2017 is compared with the Y3 2, it has a larger display screen and build, better camera resolution on its rear camera, slightly larger battery capacity and an improved operating system. Other than these, it still retains some specs of Huawei Y3 II, like the same resolution on its front camera, 4G connection capability, memory capacity for both its RAM and inbuilt storage. The Y3 2017 promises an improved level of performance over the Y3 II, thereby offering good basic functionality and price, which translates to good value for your money.

The Huawei Y3 2017 features a 5-inch FWVGA display with a resolution of 854 x 480 pixels and pixel density of 196PPI. The resolution of this screen is low, likewise its pixel density, but Huawei claims that one can still get an enjoyable gaming and movie watching experience with this smartphone.

The Y3 2017 has a plastic build with a back cover that is removable. It has a dimension of 145.10 x 73.70 x 9.45 (height x width x thickness) and weight of 175g. Judging from its dimension and weight, the device has a slim build and light weight, making it portable enough to carry around. The Y3 2017 is available in different colour options of gray, black, white, blue, pink and gold.

The smartphone also runs on a RAM whose capacity is 1GB and an inbuilt storage capacity of 8GB that can be expanded via a microSD card up to 32GB. For a low-end device, this RAM size is quite good, unlike other devices in the same range with a RAM size of 512MB. The Y3 2017's RAM can support moderate multitasking with little or no lags experienced.

The Huawei Y3 2017 also runs on Android 6.0 Marshmallow, an improvement over the Android lollipop its processor was powered with. Huawei's Emotion customized user interface, EMUI 4.1 Mini is layered ontop this Android operating system.

The Huawei Y3 2017 features an 8MP rear camera with f/2.0 aperture and a 2MP front camera. The resolution of the rear camera has been improved on from the 5MP camera of the Y3 2. This will allow images with better quality than that of the Y3 II to be captured. The smartphone still maintains the same resolution in its front camera.

Some features of Huawei Y3 2017 cameras include autofocus which enables images with clear and sharp details to be captured and LED flash to allow clear images to be capture even in low light environments. There are also several camera modes like the time-lapse, beauty mode, touch focus, face detection and panorama.

The Huawei Y3 2017 battery capacity is 2200mAh, and it is a slight increment over the 2100mAh battery of the Y3 II. This battery is removable battery, is backed up by MarshMallow's ultra power saving mode and is based on Li-on technology. Since there are no major power consuming features on this phone, the battery can last well over a day on moderate use.

The Y3 2017 is a dual SIM (GSM and GSM) smartphone that supports the use of two SIMs and it has 4G network capability that results in faster download speeds. Other connectivity options Wi-Fi   bluetooth, GPS, and microUSB port. Its sensors include accelerometer,  proximity sensor,  and ambient light sensors.

The  price and availability date of Huawei Y3 2017 has not yet been released by Huawei. Both details can be gotten from Huawei's official website when they are available.

One can only appreciate the Huawei Y3 2017 specs by comparing it with that of other low end devices. Its battery capacity is higher than that of some midrange devices, its operating system better, likewise its hardware specs.