Samsung Galaxy S7 Gsmarena vs Apple iPhone 7: Apple and Samsung are reputable smartphone companies that combine great tech with design in their smartphones to meet advancements in technology. These two manufacturers launched devices that have specifications and features that greatly match each other and at the same time, outperform the other hence, they are each other's biggest rival. Their smartphones have dominated most countries smartphone market because they are built with great hardware, software, and unique features. Since the duo is the only two companies that can sell devices at a price of about $600 in millions of units, there is bound to be a comparison between their respective devices, the iPhone 7 and Galaxy S7.

The iPhone 7 and the Galaxy S7 which were released in September and February respectively of the same year, are the most trending smartphones that have caught the interest of mobile enthusiasts and has also stirred confusion as to which is better than the other. In terms of design, camera, battery, performance and multimedia experience, each seems to outperform the other, but not without some fight from the other. Many critics have wondered if the iPhone 7 which has no unique design can be said to be more advanced than the Samsung Galaxy S7 that has remained the best flagship for most of 2016. On comparing the features of iPhone 7 with Galaxy S7, this can best be determined by an individual user whose opinion may vary since each may have different requirements from a smartphone.


Apple's iPhone 7 comes with more features than were expected, like a wide display screen, new optically-stabilized sensor, enhanced processor and a waterproof and dustproof chassis. Samsung's Galaxy S7, on the other hand, has high-end features that should give it a head start in the race against the iPhone 7. Can the iPhone 7, released months after the Galaxy S7 make you pause and think even if you are a lover of Android devices? Does it best Samsung's hero phone? A review that compares the specifications of iPhone 7 vs  Samsung Galaxy S7 Gsmarena will help you decide because where one has a shortcoming, it makes up for it with another feature the other does not have. Both devices are the best made by their manufacturers and are the best smartphones of the year. 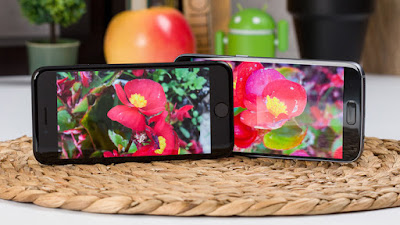 Even though both devices have good viewing angles including an excellent color gamut, superb contrast, and the sharpest visuals you'll find on any smartphone, the S7's display with 72.1% screen-to-body ratio would give better visuals. The iPhone 7 comes with a 3D Touch tech that reacts accordingly if there's either a slight touch or a hard press of the screen's surface while the S7 features an OLED technology that offers an Always-on screen that displays the time, date, notifications etc, when the phone is locked, but at a cost of just over 1% battery life per hour. To protect the S7's screen from scratches and cracks is a Corning Gorilla glass 4.

Like the iPhone 7 that shares similarities in design with its predecessor, the iPhone 6, the Galaxy S7 also features a similar design with Samsung’s 2015 flagship, the Galaxy S6. The iPhone 7 is made of metal with a curved front glass and is available in extra-stunning colors of gold, rose gold, silver jet black and matte black. The Galaxy S7 is fashioned from metal and glass, where it has a glass front and back with the edges framed in metal. It is available in five color options of black, white, gold, silver, and pink gold. Although the iPhone 7 at 138g is slightly lighter than the Galaxy S7 at 152g, both can still be handled easily even with one hand.

The iPhone 7 has 2GB of RAM, while the Galaxy S7 has 4GB of RAM. Even though the RAM size of the iPhone is smaller, its iOS provides good RAM management, whereas Samsung's TouchWiz UI and Android OS take a lot of memory at any given moment. This means that there would only be a major difference in their specs sheet, but not in terms of multitasking and switching between apps in real-world usage

Even though this external storage would be slower, it is still an advantage over the iPhone 7 with an unexpandable memory storage. One can easily switch to the Galaxy S7 by inputting the microSD card of their current phone in the S7 or insert a microSD card if the inbuilt storage is exhausted, whereas they would need a professional iPhone cleaner like MacX MediaTrans to free up the iPhone 7 space if need be.

The iPhone 7 features Apple's new 64-bit A10 Fusion chip which is the most powerful processor in an iPhone. According to Apple, this quad-core processor is 40% faster than the A9, and twice as fast as the A8. Two of the A10 Fusion’s cores are high-performance cores that handle the most demanding tasks while another two are high-efficiency cores that are used for handling more menial tasks. To manage this process, Apple has designed a new performance controller that decides which cores are to be used to handle a given operation.

Depending on the location it is bought, the S7 features either an Exynos 8890 processor with eight cores and a Mali-T880 MP12 GPU (The UK and some selected regions) or a Qualcomm Snapdragon 820 processor with four cores and an Adreno 530 GPU (The US and some selected regions). The processors on these two smartphones are fast and power-efficient, but the heavy TouchWiz overlay of the S7 does not bring out the true potential of its processor, as apps open slower compared to the iPhone.

While the iPhone 7 comes with Apple's iOS, the Galaxy S7 is powered by Samsung's TouchWiz on top Android 6.0 Marshmallow OS. The S7 is expected to get the latest Android OS, Android 7.0 Nougat. This version of Android combines split-screen app viewing, VR support, and improvements in notifications. Meanwhile, the iOS comes with new features including a new widget system, lock screen overhaul, new iMessage and an expansion of Siri's capabilities to third-party apps.

Although the iOS widgets are not as interactive or adjustable like on Android, they are well arranged in a dedicated screen and display the most relevant and actionable info which would save the time required to constantly go in and out of apps for small checks. Whereas, Android OS allows users to customize their phone from its icons to the animations, and also use of third-party apps that give more customization and control over one's phone.

With the iPhone 7, you can automatically wake the phone by tilting the phone towards your eye or turning it around without pressing the lock key by the side or tapping the home button. A similar feature can be found on the S7 where one has to press the home key twice in quick successions and is then led to the camera app. This serves as a shortcut to the camera from the locked screen. By swiping left on the iPhone 7, you can also access the camera app from the locked screen. Both OS have been optimized to give these devices a good user Interface.

The S7's camera features an optical image stabilization module, dual-LED two-tone flash, and Samsung's dual-pixel phase detection autofocus. It allows its settings to be changed such that one can change the resolution of a photo, instead of being automatically set at the highest resolution all the time. The iPhone 7 features an OIS, 6-element lens, a quad-LED TrueTone LED flash with flicker sensor, and an image signal processor. The image signal processor of the iPhone can process pictures and take great shots with tone mapping, noise reduction, and a wide color gamut.

The front camera of the iPhone 7 and Galaxy S7 are 7MP and 5MP respectively. Although both have been optimized to produce sharp images, the iPhone 7's front camera has more software features with exposure control, wide color capture, deep trench isolation, Live Photos, and Retina Flash.

The Samsung Galaxy S7 can support talk time up to 22 hours, and music playback time up to 62 hours. According to Apple, the iPhone 7's battery can last two hours longer than that of the iPhone 6S.

The iPhone 7 also lacks a headphone jack in Apples's bid to save up space for more features like better waterproofing. Instead of a headphone Jack, users of the device get a pair of lighting EarPods which are connected to the phone's charging port. On the other hand, the Galaxy S7 still maintains its headphone, Jack. This means that while one cannot charge their iPhone 7 and listen to music simultaneously via wired headphones, they can on the Galaxy S7.

The iPhone 7 has dual stereo speakers where one is located at the bottom and the other on top. Apple claims these speakers are two times louder than the Ipone 6s. In contrast, Galaxy S7 has a single bottom speaker, hence audio quality is better on the iPhone 7. The iPhone 7 supports up to 25 LTE bands while the Galaxy S7 supports 20 LTE bands. Both smartphones support dual-band Wi-Fi, NFC, and Bluetooth 4.2.

Pre-orders for the iPhone 7 started on September 9 and the smartphone is available on different couriers such as T-Mobile, AT&T, Verizon, Sprint, and Apple's website. In Nigeria, The Apple iPhone 7 and Samsung Galaxy S7 are available and can be purchased from reputable online stores in the country.

The iPhone 7 and Galaxy S7 match up to each other with their similar functionality but different features, premium build powerful hardware and software. A user's choice of one over the other would be based on their preference, especially if they prefer an iOS or Android OS. Most fans of the iPhone would prefer it to Samsung, while die-hard fans of the Android OS would pick the S7 over the iPhone. Now it'll be more of a war between iOS and Android.

Comparing Samsung Galaxy S7 vs Apple iPhone 7, there's no clear winner. Looking for a device that offers better speed, has an OS that is lighter and faster than Android, with audio prowess, greater pocketability, and manageability in the hand? then the iPhone 7 would be a better choice. But if you want a device that has better cameras, good wide display, long battery life with support for fast charge, better waterproofing, expandable Internal memory storage, available headphone Jack and at almost half the price of its competitor, then the Samsung Galaxy S7 is your phone.


In the end, it all boils down to your personal preference because neither smartphones will disappoint. I would definitely pick the Samsung S7 over the iPhone 7 not only because of its lesser price but the Android OS which I've been using for years. If I want to tweak a particular feature on the phone or want the device to behave in a certain way, I know where in the settings I should go or a third party application I can use to effect that. If a system error occurs, I have a solution at hand instead of going through several pages on Google just to find a solution. If you're a blogger, you'll need a device like the Galaxy S7 to enable you to work from phone. Also with the S7, I can easily share apps and games with other Android devices and also download them without the need to use a computer like on the iPhone. The Apple iPhone 7 is value for your money while the Samsung Galaxy S7 is more value for your money.