Infinix Hot 4 Gsmarena, Review, Specifications and Price in Nigeria:  As a successor to the Infinix Hot 3 which was released early this year, the Infinix Hot 4 X557 is the fourth device in the Hot series and the latest device both in the series and from Infinix. Released less than a month after the launch of the Hot S, this smartphone device features a fingerprint scanner as the Hot S, an Innovative feature unique to Infinix devices. This makes the Hot 4 the second smartphone from Infinix to come with a fingerprint scanner and the new XOS user Interface. 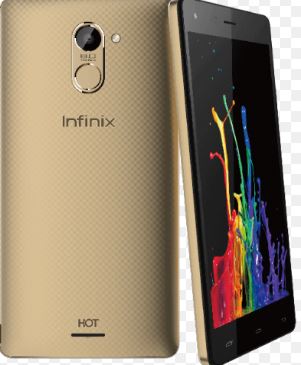 The latest variant in the Hot Series, the Infinix Hot 4, is not a camera-centric device, but it features more battery capacity, RAM, higher front camera resolution, and improvements in OS and processor than its predecessor.  This midrange device has features that make it a better upgrade from the Hot 3 in terms of security, battery, camera and software. Although it did not make a big entrance into the smartphone market like the Hot S did with adverts on social media and press releases, the Hot 4 is quite the surprise.  Below, a review of Infinix Hot 4 X557 specs, price and features has been given.

Infinix Hot 4 features a 5.5-inch display with a resolution of 720 x 1280 pixels and pixel density of 267PPI . This HD display offers 12 ultrabright backlight LEDs which makes for sharp and bright representation of words and images. Still on this display, is a smart dynamic calibration that adjusts the screen's brightness and contrast for a clear viewing during the day and a gentler display at night.

Its body is made of plastic and its back has colourful 3D texture designs with interchangeable back covers that are available in different colours which include black, grey, gold, pink and blue. The colourful design of its body makes it enticing to the youths and allows everyone to personalize their phone to suit their taste. This smartphone device has a dimension of 156.6 x 76.2 x 8.8 mm and weight of 175g.

The Hot 4 also comes with a fingerprint scanner to provide enhanced security. Instead of using passwords, PIN, pattern and Apps to lock the device, users can restrict access to their content and gain access to it by unlocking with their unique fingerprint.

Infinix Hot 4 is powered by a 64 bit quad-core processor with processing speed of 1.3GHz and a Mali-400MP GPU for rendering graphics. This processor provides lifelike visuals and a smooth gaming experience. It has 2GB of RAM and 16GB of internal memory storage which is expandable up to 32GB via microSD card. With a RAM of that size, more apps can be stored, run simultaneously and switched between with little or no lag.

This smartphone runs on Infinix customized User Interface XOS based on Android 6.0 Marshmallow. Infinix claims that this User Interface can provide an excellent interactive experience with innovative features such as beautiful themes, wallpapers, and decrease the power consumption with its power optimization features. The magazine lock screen which presents users with motivational quotes each time the screen is awake, is one of the exciting features of this User Interface.

The Infinix Hot 4 adopts an exclusive noise reduction technology to identify speech during calls, isolate it from noise in the background and automatically adjust the output volume according to environmental conditions, thereby creating an enhanced calling experience. Less noise in the background while calls are made all thanks to the smart voice technology means users get to make clearer phone calls.

According to Infinix Mobility, these cameras will capture photos with the finest detail. Compared with the camera of its predecessor, the resolution of the back camera is still the same with five internal lens elements, but higher in resolution on its front camera, from the 2MP camera as found on Hot 3 to 5MP.

The battery capacity of the Infinix Hot 4 is 4000mAh. With the XOS energy saving utility support which decreases battery consumption by 30%, this battery can last an average user for 2 days and on heavy usage 12hours.

The battery is also non-removable and has support for fast charging. It can support up to 720 hours of Standby time and up to 30 hours of Talk time on 2G network and 18hours on 3G network.

The Hot 4 is a dual micro SIM smartphone and comes without 4G LTE connectivity. Other connectivity options of this device include: USB, bluetooth, GPS, OTG, WiFi direct and mobile hotspot. Its sensors include fingerprint, ambient light, compass and proximity sensors.

The Specs of the Infinix Hot 4 in the table below is based on the Information provided on Infinix Mobility's website.

The Infinix Hot 4 is available in Nigeria, Ghana and Kenya and can be purchased from reputable online stores in each of these countries. Infinix Hot 4 Price in Nigeria ranges between ₦37,000 to ₦50,000,  price in Ghana is about 399 GH₵ and the price in Kenya is about KSh 9,700.

The Infinix Hot 4 is a moderately speced device whose specifications are neither disappointing nor so exciting. Other than its fingerprint scanner which Infinix must have gotten the hint to design the device with from the excitement of users by the one featured by the Hot S, this would've been just another upgraded device, but it isn't. The Hot 4 still offers good value for your money.
Tags: Infinix, infinix hot 4 gsmarena, infinix hot 4 jumia, Infinix Hot 4 X557, Phone Reviews, Phone Specification, Phone Specification gsmarena