AG Zoom Review, Specs and Price in Nigeria: Previously posted were the specs and price of the AG Ghost and the AG style. The AG Zoom as the least in terms of specs and price, is a low-end android device in the series recently launched by AG Mobile in Nigeria. In a bid to provide affordable smartphones, AG Mobile has designed this android device with specs that can compete with other low-end devices, bring about a good user experience, and most importantly, make the phone available at an affordable price. The price of the AG Zoom and its specifications makes it an entry level device for users who want an affordable android smartphone that can still provide the basic features that are found in any smartphone. 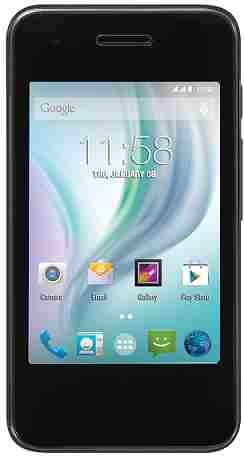 For its display, the AG Zoom features a 3.5 inch capacitive touch screen with a resolution of 480 from bottom to top and 320 from left to right (480*320). At a resolution that is half the number of pixels on a VGA screen, pictures may appear less sharper and the phone's screen might not easily be readable. The Zoom's body is made of plastic and its small size makes it easy to hold, slide into your pocket and carry about.

The Zoom is powered by a 1Ghz dual core processor that ensures this device operates smoothly. It runs on Android version 4.4 kitkat, has a RAM size of 512 MB and an inbuilt memory of 4GB which is expandable upto 32GB via a microSD card. The speed at which the CPU operates is quite low, hence processing speed might be slow, and also since the RAM size is very small, lags and hangs may be experienced occasionally while using this device.

For its camera, the AG Zoom sports a 2MP rear camera and a front facing VGA camera which is basically meant for the screen rather than using pictures captured on other screens. Let's hope that the camera sensor size on this device is large in order to still give pictures with good quality even with the low megapixel of its rear camera. A 2MP rear camera may make most people write off this device since pictures taken on it would probably look like they were taken in the 18th century. At that megapixel, pictures cropped and zoomed may lose alot of quality, but when one considers the price at which the the Zoom is offered with other smartphones in the range, you'll agree that this device is still a good option.

The battery capacity of the AG Zoom is 1,450mAh and is capable of supporting upto 4 hours talk time and 8 days standby time. Since it lacks high end features which usually puts more load on the battery, hence depleting the battery quickly, the Zoom's battery capacity should be able to keep your device powered on throughout the day. For connectivity, this device supports 2G and 3G networks and other connectivity options include Bluetooth, Wi-Fi and GPS that keeps you on the right path.

As with the AG Ghost, AG Style,  and the AG Boom, the AG Zoom comes pre-loaded with social media apps. For lovers of social networks, you aren't losing out on this one. Some of these social apps which have been pre-installed on the Zoom include WeChat, BBM, Facebook, WhatsApp and Instagram.

In Nigeria, the AG Zoom is currently available and can be purchased from reputable online stores in the country. Currently, the AG Zoom Price in Nigeria ranges from N9,000 to N13,000.


Would i buy this device?

Being a low range smartphone, there's no way i could buy this phone.

Basically for four main reasons which are: