Now, you can update your Facebook StatusVia Gadgets like iPhone, Blackberry, Xbox, iPad, and iPod even without using any of these.

Been seeing your friend's posts on Facebook indicating that they'd used Blackberry, iPhone 7 or any other mobile gadget to update their status and you'll like to do the same because trust me, most times, this is a Facebook status via a fake device.?

Here's another simple Facebook trick that will get the attention of your friends when you continuously update your status with different devices like Ipad, iPhone, Blackberry and others even if you're using a Java or Symbian phone.

If you've noticed, each time a status is updated from any of the devices listed above, Facebook includes a tag to it to notify friends.

For instance: 'Your Status update' via iPhone 6.

Not limited to devices alone, you can add funny tags to your Facebook statuses such as via Bedroom, Nasa Satellite, MTV, Moonlight, Heaven, via Ice cream, Strawberry, Toilet, Assassins Creed, Anonymous, and BerryBerry.

You will not actually be using the gadgets but you will be using an application that lets you update your Facebook status by selecting any gadget of your choice. 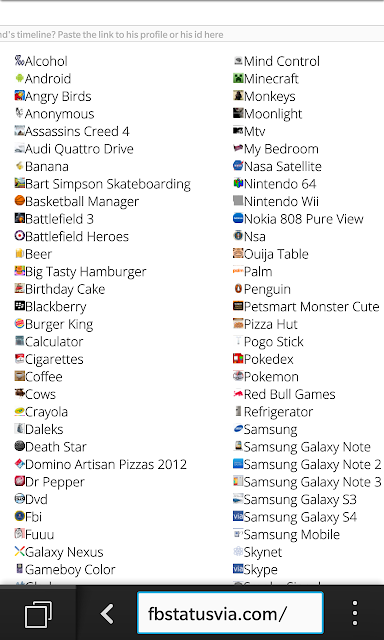